The Devil or Free Will 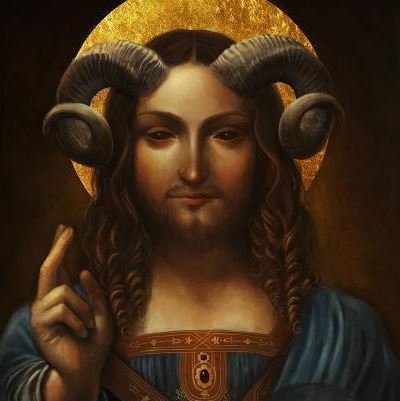 The Devil or Free Will

Early one morning, around the first of May,
A man in black came walking, into a woodland glade,
Following the sounds of pipes on this beautiful Spring
day,
High on the music that they made.
But what beheld him within that place?
A look of recognition fell across his face,
"Lucifer, oh Lucifer, why do you appear to me?
For I am a man of God, a priest.

(Chorus)
I'm no devil I'm Father to the land,
I have lived here since the Earth began,
Neither black nor white,
Priest hear what I say,
I'm green and grey.

The priest said, "Lucifer, Lucifer you lie so well,
I will pray unto my God, go back to the fires of Hell!
You fell from Heaven, and you fell from Grace. You want dominion over this place."
The Piper smiled, and to the priest he said,
"I was Lord of Animals, the Wild Hunt I led,
Until your God came here and with his jealous hand,
It was he who wanted dominion over this land.

The priest said, "All evil comes from your hand."
The Piper said, "If evil is, it lies in the hearts of
Man."
"But you lead us, oh you tempt us, to rape, to steal,
to kill!"
The Piper said, "Whatever happened to free will?"
Then the Grove lay empty, the priest told no one.
The blossom lay upon the thorn, the Piper’s tune was
done.
And in the sunlit forest, the animals they bowed,
As the Piper lay his Goddess down.

I love that song, because not only does it capture the essence of the Horned God of the ancient Pagans, but also how he was demonized by the Church to become the image of their Devil, the convenient scapegoat for all the evils of mankind.

The word “scapegoat” actually comes from the mentality shared by all primitive humans that by selecting a sacrifice to kill, they would be able to offer that human or animal to appease the wrath of their god or gods. With the coming of dualistic patriarchy, and the white washing of the High God to be blameless, pure Spirit and remote, humans projected their evil ways onto the “other.” Especially after the rise of the Imperial Roman Empire, when war, famine, plague, crop failure, political strife and disease arose in community, someone had to be named, blamed and punished for those evils. During most of the Middle Ages, those were women, the poor, heathens, political enemies and the marginalized. The Inquisition and the Witch Hunt became a vicious machine which terrorized and murdered hundreds of thousands over four centuries. During later centuries, with the colonization of America and the enslavement of the African people, evil was projected onto the Native Americans and African people whom the Europeans conquered and enslaved. The so-called “civilized” Europeans accused them of being devil worshipping heathens and they used this to justify their enslavement of human beings, cultural and ethnic genocide, and taking the land of the people of the New World and in Africa and Australia.

Projection is a psychological defense mechanism. It is grounded in the refusal to accept our own shadow side, the parts of ourselves we consciously repress, our violent and aggressive natures. The God created out of duality consciousness is divided into light versus dark. Whereas in Pagan thought, gods were freely acknowledged to have both sides, the Church chose to promote an idea where God was only good. This resulted in a need to project the dark side of Deity onto Satan. In the Bible, Satan served God’s purpose to “tempt” humans, he was not the Adversary of God himself. With this projection, the Church projected all evil onto its enemies, and by doing so, dehumanized them. This allowed for the justification of all sorts of heinous evil and torture and enslavement for centuries. If the Devil exists, he has had a field day convincing people of their own “rightness” in order to justify so many wrongs.

This mentality is very much alive and well today. Here in the United States it is being played out against immigrants, legal and illegal, Muslims, Black Americans, Latinos and First Nation people, as well as the LGBTQ+ community. We are living in deeply troubled times where once again, plague, economic breakdown, government corruption and social insecurity and unrest lead many to see the above Americans  as enemies to blame for all their problems, and these so-called “righteous” folks are usually Fundamentalist Christians. This is not be accident. The religion of Evangelicals has little to do with Christ, and a lot to do with the Imperial urge to dominate and conquer those different from themselves. There is no accident that this type of Christianity is deeply anti-women, it always has been. A few centuries ago, these were the Christians who justified the torture and burning of for the same sins of natural birth control, controlling reproduction and the knowledge of natural medicine and folk ways.

This mentality is behind the obsessive need to pin the blame of COVID19 on China, and for MAGA people, on the Obama Administration. With absurd conspiracy theories and denial of science, they once again convince themselves that the evil must have been plotted by a Black Man allied with the Devil and godless foreigners intent on destroying them. Never mind that this virus has decimated the entire world, or that their Leader Donald Trump has presided over the most disastrous response to the virus of all Western countries. it represents some kind of primitive psychological need to blame their usual enemies for the evil, instead of looking at the truth that our overpopulated world and global, neo-liberal paradigm are the real culprits. Acknowledging that our way of feeding humanity, of factory farming, of clear-cutting forests and the global economic machine which benefits transnational corporations who exploit slave-level labor to create obscene wealth and power for few at the expense and misery of the bottom 99% of humanity would require we would have to change. And it is a lot easier to blame other humans we fear or dislike or think of as “others” than it is to acknowledge our own culpability and to change our Western lifestyle and paradigm.

And what does any of this have to do with Free Will? For a country supposedly founded on freedom, we are still very much struggling to be free of this dark past. Recognizing the idea that this planet and level of consciousness is a planet of free will is an evolutionary step above that of the primitive mind of blame. Free will is our freedom to choose good or evil and the understanding that with our choices comes responsibility for our karmic consequences. It is wrong to think that consciousness and evolution are entirely linear. As we can see, there are cultures – specifically in the East and definitely among tribal people, who have understood this idea for centuries. I believe that human evolution is more of a spiral than a line, and there are times we have spiraled downward to repeat lessons in order to really master them. When we fully understand the responsibility of free will, we forever remove the idea of victim from our mind. We also remove the need for victims to blame. We fully understand that the circumstances and conditions of each lifetime and each moment of our lives where we encounter negative consequences or experiences, are either the consequence of bad choices, or a chosen trial for us to learn from and grow. The most difficult situations to grasp this idea come when bad things happen to good people, or to children. Yet, when you factor in rebirth, it is entirely possible to view even the most tragic birth as an opportunity for growth and experience for both a child and their parents. Karma not only affects individuals; it also affects the collective. Seen in this way, it helps us realize that much suffering on this planet both now and in the past have been caused by the Karmic debts of past civilizations.

We have the ability to choose between doing good and doing evil. We also have the ability, when we want to blame someone, instead to review our own motivations and behaviors to see where we have been wrong and where are actions have led us to bad results. We have the free will not to participate in collective behavior and mind-programming by a dominant culture intent on turning us against convenient scapegoats instead of realizing how we participate in unjust and destructive systems. Free will allows us to choose to accentuate and devote ourselves to a path of liberation from all suffering, ignorance and violence for all sentient beings. We can choose.

I do believe there are evil spirits, both incarnate and discarnate out there to tempt us into doing their bidding and continuing suffering, violence and destruction of one another as it feeds their appetites and agendas. But I do not believe we are being ruled by an omnipotent Deity to choose evil, the evil as the song above says, comes from our own natures. We choose to be greedy, petty, hateful, racist, sexist, indifferent to the suffering of others, lustful and violent. When we do so, we ally ourselves to others who choose to be evil. Like attracts like. Sometimes, when it is difficult to see which path to choose, when people claim rightness and righteousness for themselves, the Master Jesus gave us the way to test that. He said, “By their fruit, you will know them.” Those who are spreading love, compassion, justice, freedom and kindness are showing the fruits of the Spirit. The true Spirit of the Universe is beyond good and evil and the highest energy of the Universe is Love. The purpose of our sojourn here at this level of consciousness is to master all experience, understand the consequences of all choices and conclude the truth and benefit of right action. In doing so, we free ourselves from Karmic debt with a relentless pursuit of right living, thinking and behavior. The Nature of the Universe is evolution and progress, may we choose always the path of progress and good will.

Free Will Horned God Scapegoating Projection Karma Spiritism MAGA
What is Spiritism?
The Truth about Life After Death
Comments